Download The Hulk Mod for GTA 5 uploaded by Max Edwards.

The GTA 5 hulk mod is provided to give players an opportunity to turn themselves into giant monsters and terrorize the city. Video games are amazing when it comes to stress management. They are created to boost moods and make one happy even when everything is almost falling apart.

Grand Theft Auto 5 is an enhanced video game that offers gamers with an opportunity to learn and display their abilities. Not only will you learn from video games, you will also gain experience that will be applicable to real world situations. GTA Cache is provided to meet your gaming needs. It is where you will discover the best way to unleash your anger as you fight your opponent in the gaming world.

The actions of Hulk in the Grand Theft Auto 5 are enormous to make gaming more satisfying. You can leap as far as a mile to grab a car and throw it to your enemies. As a giant hulk, you have the ability to throw the cars to the direction you want and at your convenient time. Check through the GTA Cache to discover more ways to terrorize the Los Santos city, living it in a complete reckless abandon.

How to Install The GTA 5 Hulk Mod Script

The hulk mod installation is very simple like every other mods on the GTA game. So, you do not need anyone to direct you on how to get it done as the processes are already provided on the official game site. The hulk mod is one of the most captivating mods with a lot of features that can make the terror in the city.

Leap miles to the sky as the hulk to capture your enemies with ease. More so, the mod has been updated to the version 3.0, and you can know the difference between the two versions when you play the both. 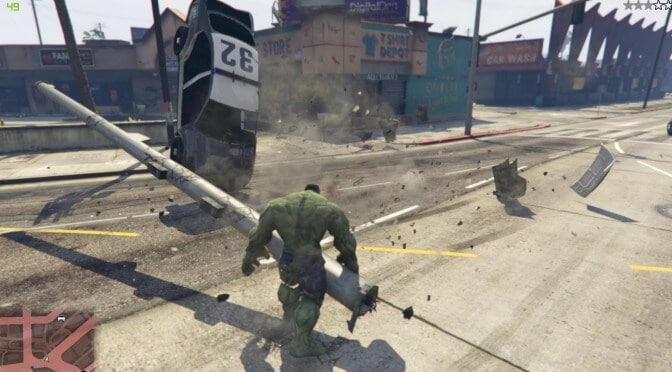 Several bug fixes are possible in the GTA 5 hulk mod. You can easily fix the movement of the head, and fix the hands. The new version of this game mod comes with bigger hulks to intimidate your enemies the more. Each of the hulk mods comes with improved features.

The version 1.1 released initially fixed the texture bugs, head movement and hands. The version 2.1 removed the crouching bug and provides the giant in normal and big sizes. The version 3.0 and 3.1 offer the following improvement:

Experience Gaming Satisfaction with The Hulk

Do you think you are already superhero? You can show wait until the military arrived the scene to fight them. Fighting the military is the funniest aspect of Grand Theft Auto hulk mod you should not miss. It is the more funny fight that will prove to the people around that you are truly an unbeatable monster.